The idea of building a Home (now named Paraplegic Rehabilitation Centre) was conceived after the 1971 Indo-Pak War when there were 60 Spinal Cord Injury (SCI) casualties... 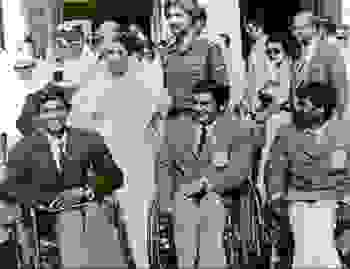 The idea of building a Home (now named Paraplegic Rehabilitation Centre) was conceived after the 1971 Indo-Pak War when there were 60 Spinal Cord Injury (SCI) casualties. The idea was based on already existing such Centres in the USA (Veterans Home), UK (Spinal Cord Injury Centre Stokes Mandeville Aylesbury) and other European countries.

The initial plan was to open a Centre with a capacity of 24 beds and nineteen staff quarters. The foundation stone was laid by General (Late) GG Bewoor, PVSM, the then Chief of Army Staff on 23 June 1973 and the Centre was inaugurated by (Late) Shri Fakhruddin Ali Ahmed, the then President of India on 20 Sep 1974.

In 1979, the Centre was fully occupied by Paraplegic Ex-Servicemen who had been invalided out of service. 30 beds were added to cater to increasing needs. Besides, we also realized that there was a need for families to live at the Centre. We hence added four specially designed quarters for married Ex-Servicemen.

Over the years, as needs grew, we expanded the Centre to have 117 beds and 34 family quarters, making it the largest Centre of its kind in our country and one of the largest in South East Asia.

Paraplegic Rehabilitation Centre (PRC) is situated in Range Hills, Kirkee, Pune and is a well known rehabilitation center for defense personals suffering from spinal cord injury while serving the Nation. The main aim of this center is to provide good aftercare and rehabilitation of personnel’s of Defence Forces of India who are medically boarded.

We are glad you are here. Our website should be a great start to know about our Premier Institution; should you require further information, please feel free to get in touch with us...